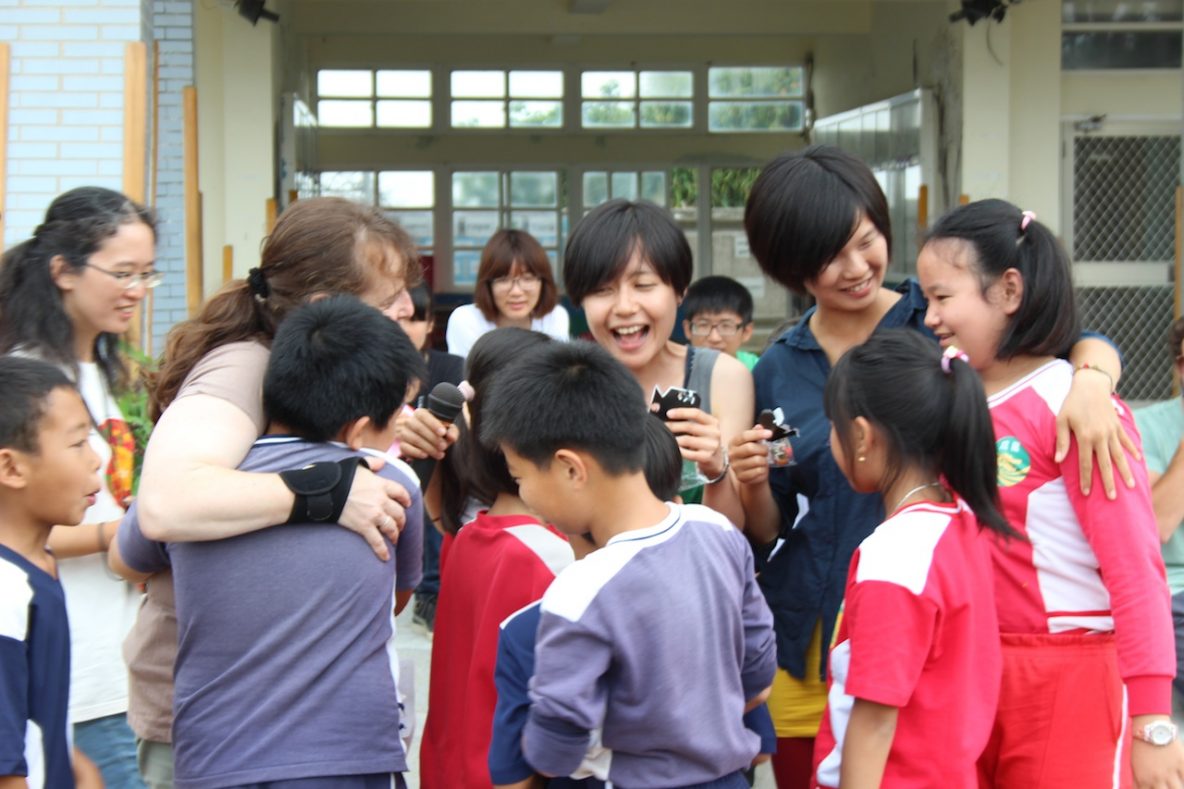 Despite having an odyssey of a day that took me from waking up from only 5 hours of sleep to a long morning of goodbyes to my fellow project colleagues, community and children to a drive to the High Speed rail to Taipei, more goodbyes to some of the other artists who took the train, looking for my host Robin’s apartment in downtown Taipei in the rain lugging my luggage, Then meeting Kuei Mei and her friend Demerie who made an appointment for me with a Chinese Accupressure massage Master to help me with my hands.  He said I was a difficult case and spent an hour moving from my feet up to my neck trying to release the tension in my body.  The most bizarre part was when he put my head in an SM type of contraption then had his assistant sit on my feet while he yanked my head up while lying down to stretch out my spine.  Oh boy did I scream, while he kept this most serene peaceful smile on his face, Which would not have been too embarrassing if his massage tables were not just in the middle of an open office with everyone walking around including a young girl who I guess was his grand daughter just watching me intently.

The pain in my hands went away for the day, but unfortunately they started to hurt again over night and woke me up along with the birds in the morning. I had hoped to have a good sleep because after the massage we went up into the mountains to a traditional Japanese hot springs for a soak. It was very funny, it was a tiny stone room built by the Japanese over 100 years ago, and when I went to get into the water the women in the room screamed no and motioned that I should first scoop up the water and pour it on myself first to get my body up to the temperature of the water which was around 42 degrees Celsius.  Quite quite hot, but mineral water right out of the belly of the earth.  The stone walls were dyed yellow from the sulfur. Also mind you this was a public bath again, indoors in a tiny room with only women and we were all naked. I felt like I was in one of those traditional Japanese wood block prints of the women taking baths together.

After a long bus ride and train back to down town Taipei all I wanted to do was do my laundry and go to sleep after a shower, but Robin instead took me out to a Karaoke party that she had to attend, using me as an excuse to leave early,  but that was not until after I was told I had to sing a song. I finally gave in to the Taiwanese love of Karaoke and sang Michelle and the Carpenter’s On top of the World. Thankfully they all joined in with me and were quite happy to have me along. The Taiwanese must be the nicest people in the world. They are so warm and joyful at welcoming you as a stranger, and toasting to your presence, which of course means drinking up as well (stuck to wine again this time).