WEAVING REFLECTIONS IN TEA TABLE INSTALLATION IN AROUND THE TABLE: STORIES OF THE FOODS WE LOVE AT THE NEW YORK…

Empty Cattails and Seed Pod on view at the Williamsburg Art and Historical Center. Opening Reception: Saturday, May 7, 3-5pm…

My Window in True Stories at The Untitled Art Space

Michele Brody takes the widest possible context for her work: the social, cultural, and natural environment. Since the mid-1990s, she has been working on a series of collaborations with nature: installations and sculptures that use flax, grass, herbs, and plants native to a specific site as essential sprouting, growing, and withering elements of the work. Various installations have mounted these growing elements in or on fabric, plastic, or glass structures that both present and isolate the encapsulated nature. The resulting works are highly artificial and starkly contradictory environments, sometimes minimal and rigid and sometimes flowing and supple, that isolate rather than cultivate the natural forms.

The first of these works that I encountered was Nature Preserve, a beautiful and disturbing landscape of plant cuttings growing in tall tubes that are lit from above. It makes a forest that is artificial, that is on life-support, that engages the viewer both visually, standing in front of or walking through this artificial forest, and it also engages intellectually, about the environment and environmental issues. Nature Preserve is a visually, intellectually, and emotionally engaging piece, and an indication of the scope and depth of the artist’s work as a whole.

In other works, such as Looking Out, Seeing Below from Above, or Land-Scaping, she has brought together growing plants with forms made of soft fabric or solid architectural materials, embodying the range of human experience from city-building to sewing, from urban life to private life.

Brody has also used a highly cultivated and processed plant form, tea, as the germinal focus of social-interaction works in gallery, community, and public spaces. Tea is as much a social relation as a natural product, and Brody exploits the ceremonial and interactive aspects as well as the ability of brewed tea to act as a dye or stain. CommuniTea has brought all these possibilities into locations all over New York City, providing a sculptural site in which performance, spoken-word art, and community gatherings take place within a room-sized quilt made of hundreds of used teabags.

A third strain of Brody’s recent work focuses on the built environment of historical neighborhoods, in sculpture and public art varying from cast-iron manhole covers referring to local and historic landmarks (both architectural and natural) to translucent paper panels that pay tribute to the present and the past (and the possible future) of these sites by not only representing the current (and rapidly gentrifying) man-made structures but also including natural elements, such as seeds.

Her recent Harlem Roots is a glowing, ghostly evocation of ways of life, before gentrification and before human habitation, in poetic juxtaposition with daily life in the present.
Brody weaves together history and culture, experience and form, in works that engage us aesthetically and socially and inspire us to consider the whole living context for our present life and future prospects. 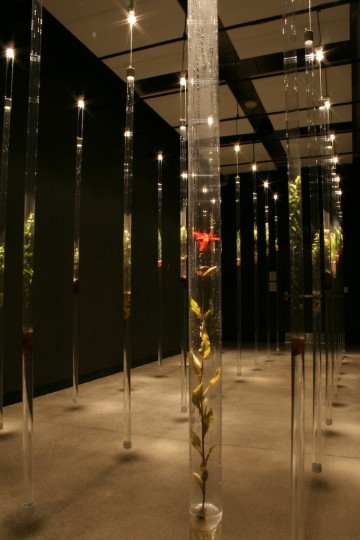 A fourth generation NY builder, artist Michele Brody loves working with materials. She recalls how her father groomed her early on to become an architect so that she could continue the family tradition of builders and land developers. Although she excelled in the study of Architecture, she was not attracted to pursue it as career. ” I prefer building with my own hands,” she says. So in 1994, instead of getting a degree in Architecture, she graduated with an MFA from the School of the Art Institute of Chicago from the Fiber and Material Studies Department.

AS: In your bio you say that you work in a process of collaboration with communities as “a means towards developing an interpretation of the sense of a place as an outsider looking in.” Can you elaborate on that?

Michele Brody: This practice is best illustrated by a public art project I produced in France in 2002. I was invited by the northern town of Arras to design a series of Burguet (cellar doors) for their central square. Arras is a popular tourist site for its unique architectural ensemble of 18th century Flemish-Baroque-style townhouses. Below each house, accessible only by the exterior sidewalk cellar doors, are a vast underground network of rooms and caves that were carved out of the limestone foundations for the ruins of a nearby 12th century Abbey. The designs I generated were based on careful studies of the townhouses’ architectural details, as well as some of the historic uses of these underground spaces such as a horse stable, brewery, cobbler and print workshop. While working as an artist-in-residence I was asked to present the project to a group of local school teachers. While showing them my drawings and documentation they expressed how surprised they were to learn so many new things about the town and buildings, even though they had lived in the area all their lives. There were details in the surrounding architecture I captured that they had never noticed before. It was as if it took an outsider with fresh eyes to help them see their home in a new light.

AS: It seems that Tea is central in some of your installations. Let’s look at your installation Reflections in Tea, an interactive community-based public art project. What is the idea and process behind this project (2007-2020)?

Michele Brody: Every morning I start my day with the simple ritual of brewing and drinking a pot of tea. This daily practice developed into the long-term project Reflections in Tea, which has evolved into an interactive community-based public art project inspired by the worldwide tradition of drinking and sharing tea. The ritual performance of preparing loose-leaf tea within special paper filters is shared with individuals and groups. Participants’ conversations are then preserved by being transcribed onto the stained tea bags that have been dried and flattened as note papers. The process culminates in the creation of an ever-growing set of fluttering paper quilts, which from afar form an overall composition of a craggy mountain range reminiscent of the mountain sides where tea grows. Up close you can see they are pieced toget her with over a thousand individual handwritten notes and unique drawings.

Initially envisioned as a mobile teahouse, the main component of Reflections in Tea is the invitation of the public to enter and sit within a semi-private space to share a pot of tea and their stories and memories. By taking the time to cross the threshold of the teahouse, each participant is introduced to how the drinking of tea is practiced throughout the world as a transformative custom.

Since moving to The Bronx in 2013, Reflections in Tea has been serving regularly to senior citizens and communities though SU-CASA Residencies, and a series of multi-media performances and poetry centered events called CommuniTeas. The culminating goal behind these events and installation is to reflect back onto the community both a visual and virtual experience of their collective memories and experiences. Where their variety of voices, languages, penmanship, poetry and stories come together to create a unifying expression of the diversity that holds communities together.

AS: In Harlem Roots (2013-16) you seem to explore the historic technique of watermarking which has been used to embed company logos in the paper fibers, referring to urban development and gentrification. What is the genesis of this project – the idea, process, form?

Michele Brody: The genesis of Harlem Roots focuses on the mixed blessings of gentrification I experienced while living in Harlem in a new lottery building from 2006 to 2013. I wanted to illustrate the complicated and layered history of urban development i n contrast with historical, environmental and community preservation. I incorporate the technique of watermarking by embedding the paper with the architecture of a set of Harlem row houses in various stages of decline and repair in order to reference the process of building the imagery as a metaphor from the foundation up. Where the actual structure of both the paper and buildings are revealed when lit from behind like an X-ray. I am also interested in expressing how the influx of Branding as a marketing tool can be re-imagined to express the process of building up each layer within the handmade papers embedded with the watermarks and sprouted seeds, which spread their roots. When merged, these ghost-like images represent Harlem’s complex history of development, renaissance, decline and community pride in response to its gentrification.