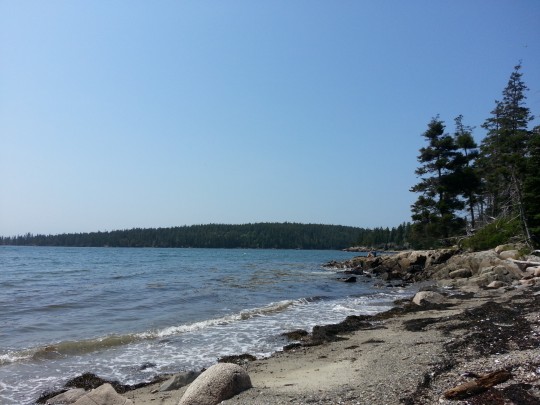 Just rolled back into New York after a lovely week long trip to Maine to visit with my dear friend Melody and take a much needed break from NYC. Some of you might be wondering why it has been such a long while since my last travelogues from Taiwan and Boston. Well I have come to the realization that over the past 5 years most of my traveling has been during the odd years. Europe/Maine/Michigan in 2011, Taiwan/Japan/Boston in 2013, and as of now there are tentative plans for India and Sweden in 2015.

So for Maine, when I first arrived after an uneventful 7 hour bus ride Melody whisked me off to the Crescent Beach for a long walk in the cold cold waters of Maine (actually not that bad once you got used to it, Melody really wanted to take me swimming, but it was just too early in the summer in Maine for me to be in the Ocean.)  Then a lovely meal of homemade pate from sprouted sunflower seeds, organic local tomatoes and cucumbers with flax seed, crackers.

For my first full day in Maine we went to one of my favorite places in Portland for Breakfast, a southern style place called Hot Suppa.  We both ordered the eggs benedict on friend green tomatoes with grits. We then did a bit of shopping and touring around the Portland area to be followed by another walk on the beach with a visit to the Bay side to watch the sunset and walk in some unusually warm pockets of water during low tide. Tried rather unsuccessfully to cook us a Tortialla Espanola, but we finally enjoyed what we could of it late into the night just like the Spanish do.

The next day we left for further north up to the area near Deer Isle, which is the oldest county in Maine for three days.  Along the way we stopped into a farm where Melody purchased 5 pounds of raw wool fleece shorn from sheep that live on a nearby island, and who the farmer said “are washed by the fog.”  Melody wanted the fleece to sleep on, which makes a wonderfully soft bed pillow.

We then stopped into Avena Botanicals in Rockport for a visit through their herb garden and to buy some healing tinctures. We stayed the next three nights in Brooksville at the farm house home of Kim Peralta who was one of the founding members of my first yoga school at the BKS Iyengar center in NY. I had stayed with her two years before during a prior visit through airbnb and got to see the yoga studio that she had envisioned over the garage completed in a wonderfully peaceful and fully equipped Iyengar Yoga studio where she hosts week long retreats and daily classes. We attended a 7 am morning class on thursday, which we had a little tough time waking up for because that night her smoke alarm system went off accidently waking us all up at 3 am. That day before on wednesday we had gone out to Isle Au Haut for a 5

hour hike around the Island, which includes a branch of Acadia National Park.  I had always wanted to go out to this little island where only 30 people live year round, where for a long time the only way to get out there was by the early morning mail boat. It was so quiet and peaceful for a National Park in summer (two years prior I had been up to visit Nancy who was working over in the main part of the Park on Mt. Desert Island, which was filled with non stop visitors.)  We roamed off the trail a bit to hang out on the rocks by the water, where Melody took a little dip in surprisingly warm water while I watched the eagles flying overhead. We celebrated our hike with reubens at a local place in Blue HIl, and went to a brew pub to sample their hand crafted beers.

After our early morning yoga class we headed over to the Good life Center.  A place that Melody has been wanting to visit for years, which is located at the last hand-built home of Helen and Scott Nearing, a 20th century pair of Homesteaders located in Harborside (Brooksville), Maine on five acres of forested land overlooking Spirit Cove. The Nearings left NYC during the Great Depression to spend the rest of their very long lives living off the land first in Vermont and then in Maine. They preached living a good life by living simply, eating simply and giving back to the land.  Their last home was built as a memorial to this lifestyle, which hosts a residency where this summer there is a musical couple farming the land and hosting tours of the center.  Melody really connected with their mission of living a handmade life as well. Melody had been spending the past year learning how to make shoes, ceramic tea pots and is now studying jewelry making.  We had met during the Hudson River pageant where we experimented with using natural dyes together. After the good life center we were told to visit the Deer Isle Hostel on our way to the Haystack Mountain school of Crafts where I studied for two summers right after college. The Deer Isle Hostel is amazing.  A modern 21st Century version of the Good life center, where Dennis a local Mainer and his Swedish wife built a 1700’s style house by hand and tend the most awesome organic garden.  The place uses a composting toilet to help fuel its electricity, as well as solar panels.  Actually most of the toilets we used in a lot of these off the grid places used composting toilets, or as the Nearings used to call their bathroom an “Earth Closet.” After hanging out and chatting with some guests and the owners we headed off to Haystack to view the end of the session art work and to show Melody around the studios.  It is such a magical place.  What was amazing was I said hello to Stuart the Director and when I asked if he remembered me (from 1990) he said of course he did and then preceded to ramble off my whole resume. AFter years and years of many many visitors and students at Haystack he still remembered me because when I was there my first time in 1989, it was his first year as well.

The best part for Melody was actually discovering a pair of ancient granite boulders bolted together and set in the middle of the woods on a blanket of moss.  She truly believed they were left there by aliens.  Later we found out that that area was mined early on for its granite, so most likely they were left over from that early Maine industry. When we got back to Brooksville we were overwhelmed that night by the fireflies lighting up the surrounding fields. They were almost like traveling flashlights.

So alas on Friday it was time to leave, Kim’s 20 year old son who works as a local chef and keeps the house vegan gave us hugs goodbye after spending time talking Raw food and Fermentation with Melody.  We headed over to the local bakery who only serve on Tuesdays and Fridays to load up on their fresh sourdough bread and crossiants. For two people who have been trying to cut bread out from their diets we went crazy over this wood stove fired bread and bought 5 loaves. At first they would not sell us the last of their Maine Grain bread because they were misshapen, but we did not care, it was the taste we were after, not the look (they each had a little tail that hung off the edge instead of being perfectly round. The morning of the 4th started out pretty nice up in Maine, but once we started heading south at around noon, the sky began to rain and rained all day long way into the night. For the first time since I could remember I could hear the rain splattering on the roof of Melody’s cottage.  In New York I can never really tell if it is raining when I look out of my apartments because I can never hear the raindrops falling, and barely see them as well up against all the concrete and asphalt.

Oh gosh there are so many other wonderful things to remember and share about this trip, but like the author of the current book The Tiger’s Wife by Tea Obreht, that I was recently recommended wrote “you must understand this is one of those moments…those moments you keep to yourself,”  I can only paraphrase what she writes about how you have to think carefully about where you tell it, and to whom. Who deserves to hear it?

I hope you have enjoyed hearing about this moment as much as I enjoyed living it and sharing it with Melody and now all of you.