Oh my goodness, my English breakfast this morning in Berwick-upon-Tweed at the Castle Hotel was probably the most healthy and delicious vegetarian version of an English breakfast possible. The best was the veggie sausages. A potato based sausage roll, fried and crispy on the outside, filled with lots of little veggies (no fake meat or casings), poached egg, tomato, mushrooms and baked beans with whole wheat toast. Just what I wanted for this morning, as I include the exploration of healthy versions of local foods.

Today I arrived in Edinburgh. And it was all I had hoped it would be for just a 24 hour visit. I planned it to arrive during the beginning of the Fringe Festival. An all out performance party along the Royal Mile in the Old City, where comics, acrobats, jugglers, buskers, dancers and theatre troops line the streets trying to invite you to attend their performances by being dressed in all sorts of costumes, performing sketches and acrobatics while handing out flyers for their shows. The City is covered with posters for all the different shows going on in a wide range of venues like art galleries, churches, community centers and cafes, oh and theatres too. I just happened to be staying right down the street from the main office of the Fringe, where pianos could roll out in a dime, and performers could have a space to take a break. Melody and I had experienced such a wild mayhem of live performance while visiting Avignon in 2015 during their Fringe Festival. The difference being that now everyone was shouting out their wares in English versus French. What a joy just to walk the street and watch the really sexy musicians, crazy jugglers and even a visit to an artist building for open studios where I was introduced to another paper maker who just happened to walk in the door to the studio of a weaver I was speaking with.

The next best food experience this day was to go to a sister restaurant created by Tom Kitchin in Edinburgh. His main space called simply The Kitchin was featured in the Scottish road tour show Men in Quilts, with two of my heroes from Outlander, Sam Heughan and Graham McTavish (again another pop culture TV reference). The Kitchin is closed on Sunday’s so the place I went to for lunch is a new one called Kora, and I just could not stop ordering one plate after another, it was so good. First I had 2 oysters (with a shout out to Melissa), which tasted like I was swallowing the sea with bits of pickled ginger, then seared scallops in some kind of devilish sauce served on the half shell, a goat cheese tart with sweet caramelized onions and finished off with a panna cotta (with a salute to Linda). All this food kept me going for the rest of the day, but at 9:00 pm, I have to admit I did scoff down a tin of shortbread cookies and warm milk while walking around during the sunset and checking out more of the hot buskers, and last of the comics vying for viewers.

As I walked back to my place for the night, I came upon a little tour being given by a witchy woman in black. She was explaining that there was still a law in the books stating that it was illegal to dump your chamber pots before 10pm. Which in theory means (but did not recommend) that people could still dump their chamber pots after 10pm to around 4am if need be. So she warned us to watch out overhead. She also stated in her high pitched witchy voice that the reason why the alley ways that turn off the Royal Mile are so steeply sloped was to allow the excrement to slide down the hill towards where the cows were housed at the bottom. This just happened to be right where I was staying, but at least a few stories up. 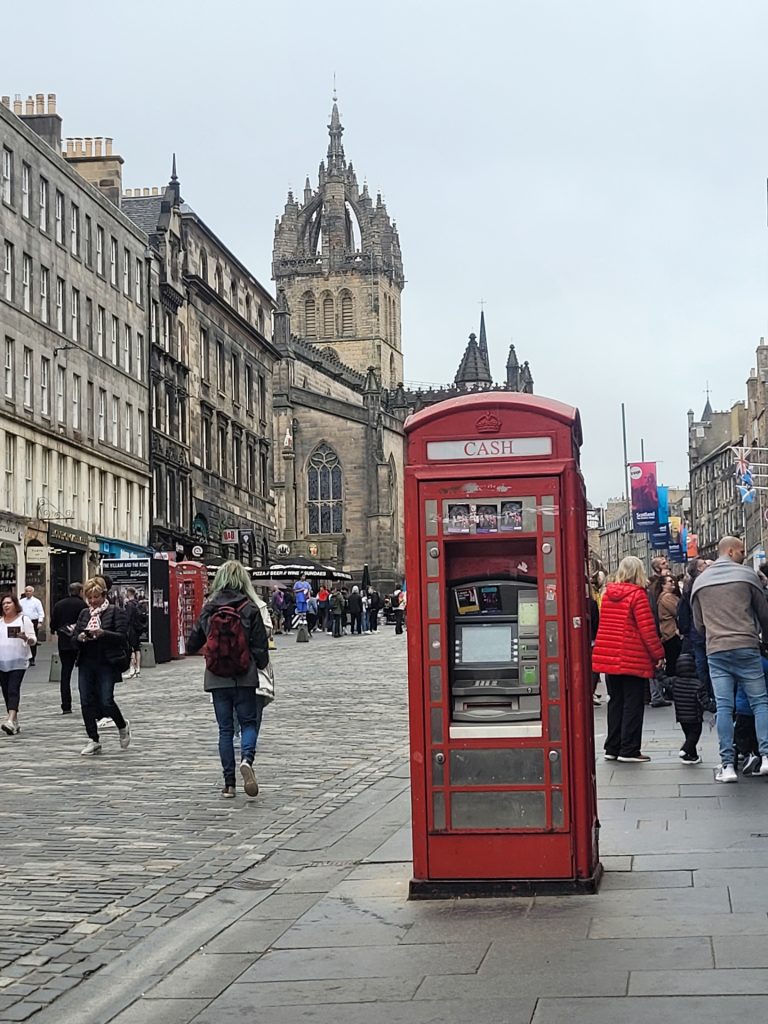 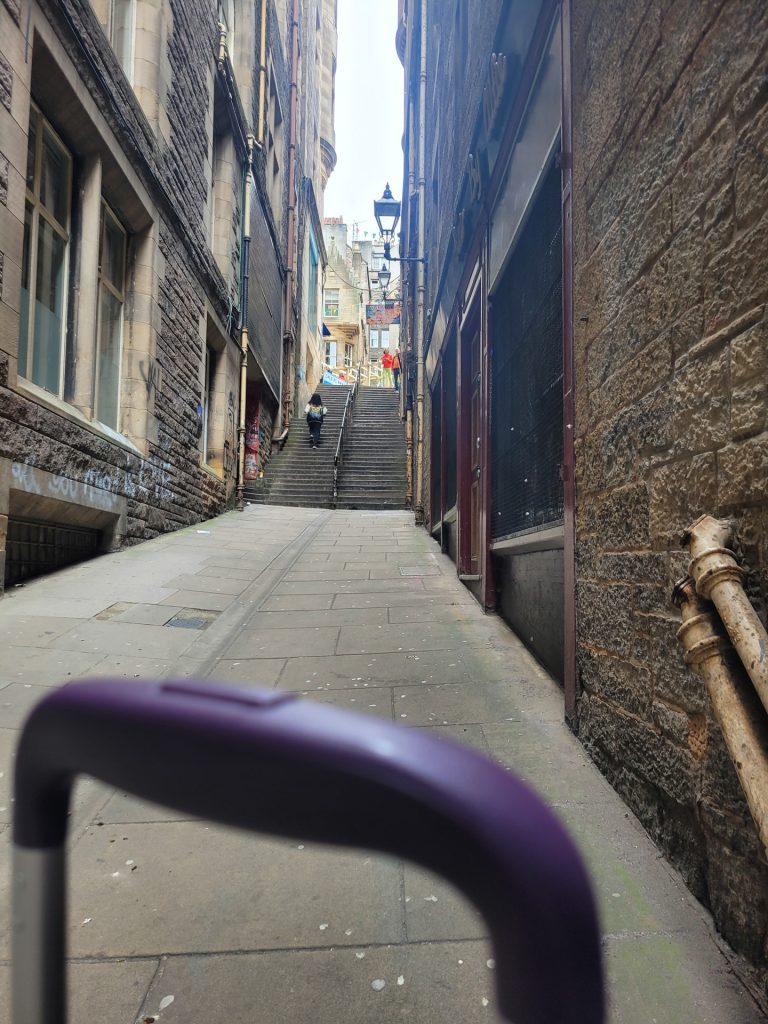 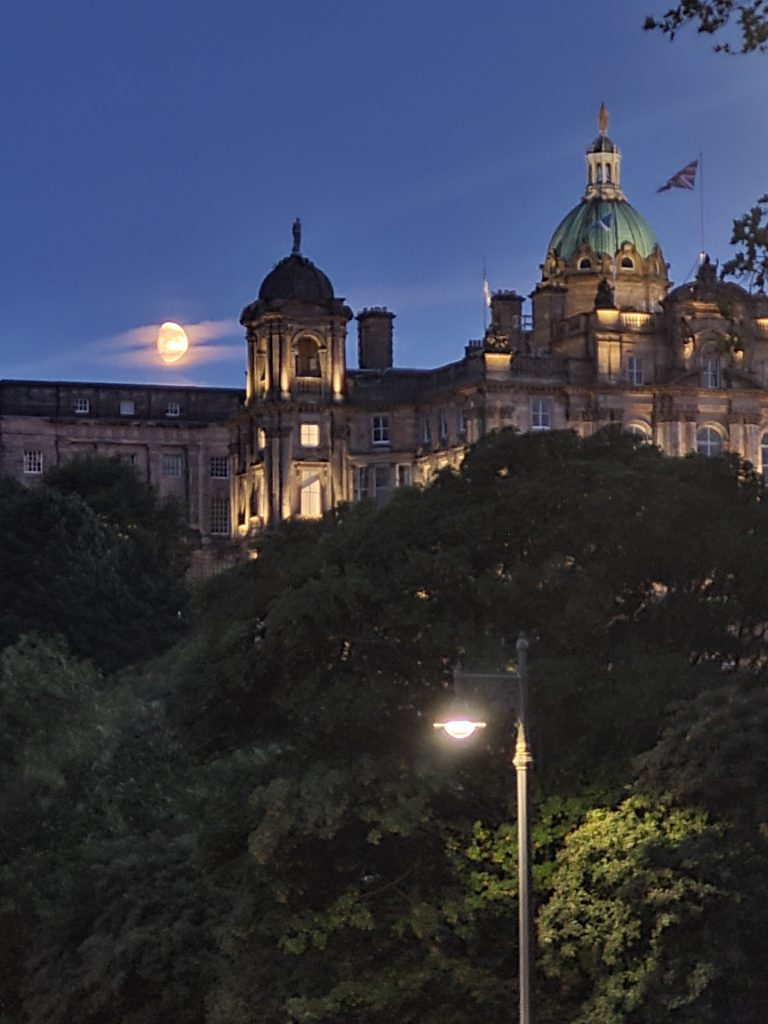 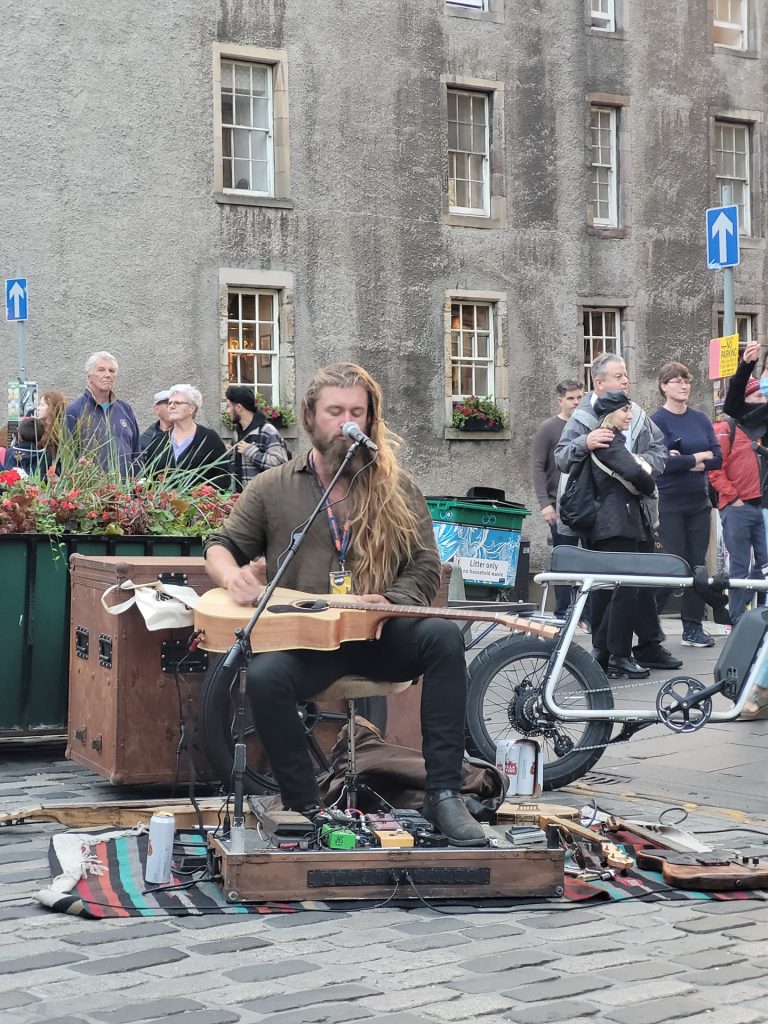 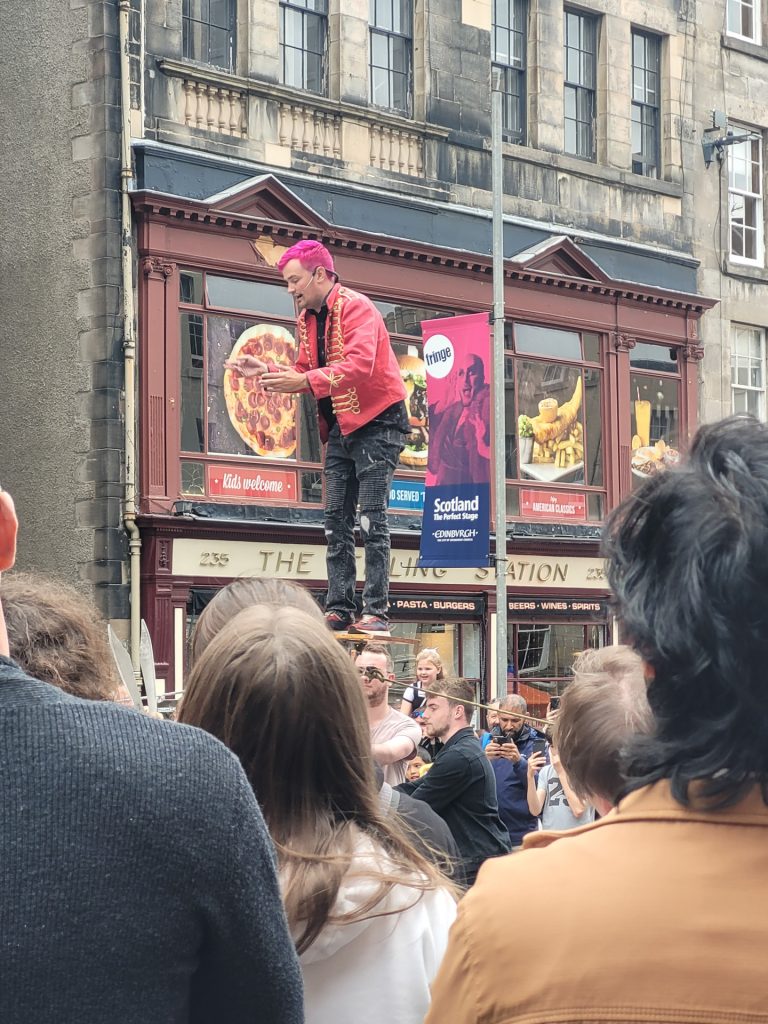