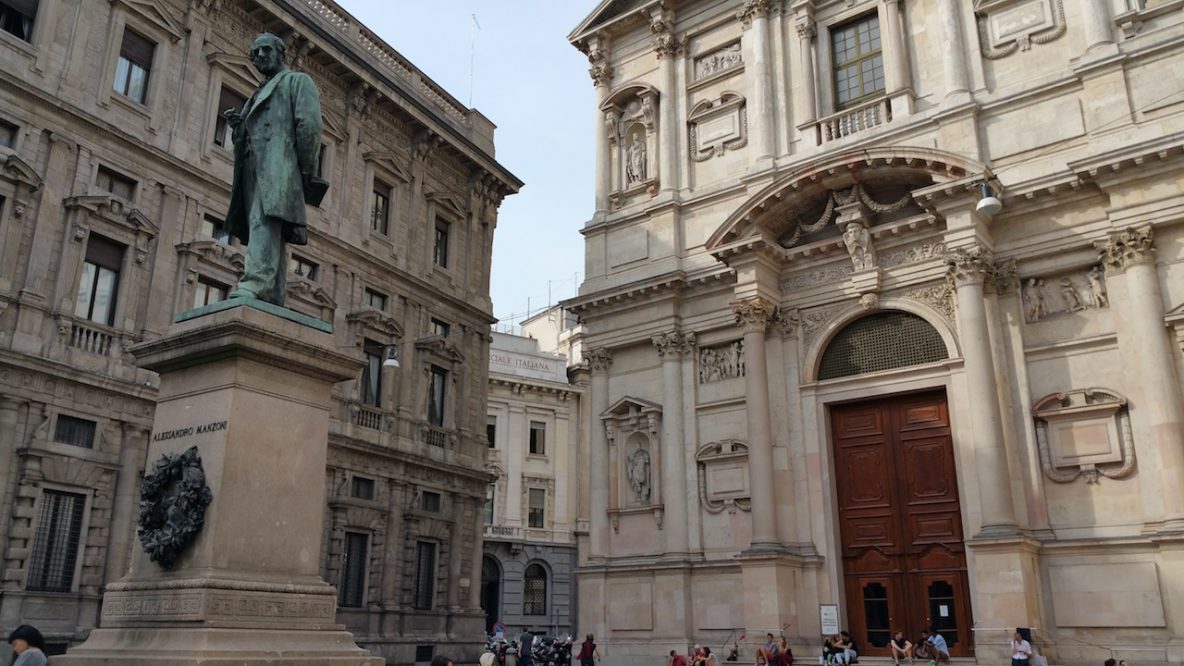 We had a very lovely and inspiring day in Milan yesterday, despite desperate attacks by buzzing biting mosquitos throughout the night before.

Waking up to an invigorating pot of freshly ground Ginger tea made by our host Antonella in her garden blooming with plums, Blue hydrangeas, roses, snap dragons and herbs.

In order to stay awake throughout our roaming around the center of Milan, Melody drank two delicious cups of Caffe American Coffee made in Italy.  I on the other hand had my first cup of Coconut Gelato, and plate of fresh pasta.

We went to two museums, the Museo del Novecento, which  traces the history of 20th Century Italian Art up a glass enclosed  ramp installed within a medieval castle, and one about Leonardo Davinci, which was rather a bust for 12 euros to see remodels of  his inventions and machines, and interactive media about the  restoration of The Last Supper.  The most interesting part was  to see individual pages from his sketchbooks on display along  with the facsimiles built from them.

With all our wandering, we sometimes had a destination like an  impeccably laid out Fabric store where Melody bought a  beautiful silk mesh to keep out those pesky mosquitos (as well as  use to squeeze her lemons and limes) and The Duomo the third l  largest cathedral in Europe, but there were times when places  we had wanted to find just kind of appeared such as the one  bank Melody could use to take out cash in the Piazza San Fedele.

She took me up to a restaurant she remembered overlooking the  historic Galleria Vittorio Emanuele II (a19th century mall)  filled  with Prada, Gucci and a Rizzoli book store, but instead of  finding the place she had remembered, it instead was a fancy  market place, which at first you would think could have been the  inspiration behind Eataly near Madison Park in NY, but in fact  was only 2 months old, which made us wonder if perhaps  maaaaybe it is the reverse. Funny case of circumstance.

Today we are off to the Coast to see the magical beauty of the  Riviera and the Cote Azure, and maybe the Cinqua Terra.