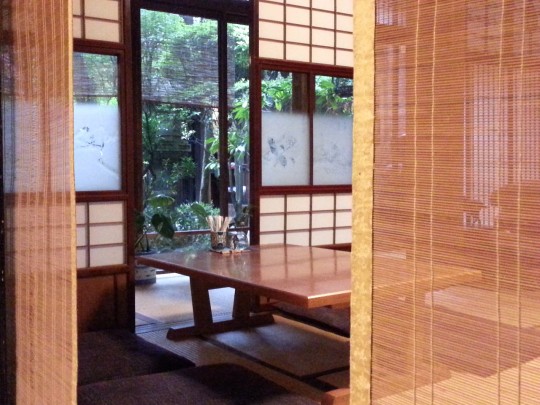 Besides having to deal with people in public at the rail station, hotel and city streets, this has truly been the first day I have spent entirely alone so far and without conversation since my first weekend in Taiwan. What a contrast to the group meals around great circular tables with colliding chopsticks, long evenings of laughter and beer around burning insect repellent coils, karaoke and giving installation instructions. I often say I am a loner who does not necessarily like to be alone, but during this trip I have learned to savor these moments. I have had wonderful hosts and friends introduce me to the culture and life of Taiwan and now Japan, but to just soak quietly in a hot springs under a soft red japanese maple has surly been a treat for me today.

Especially after being caught under the rain while touring the old preserved city section of Takayama. For a moment I could feel going back four hundred years to the time of the Edo Period as I walked down empty streets of tiny and tightly packed darkened wood paneled 2 story houses. Where within you can briefly gaze upon an inner courtyard garden with low slung ceilings. Was feeling tired and in need of a snack and warm cup of tea so entered a side street cafe inviting one in to sample the interior of a renovated old house and store rooms.  In from the cold to the sounds of Jazz playing and a warm toilet seat. No wonder the Japanese invented their famous multi-task toilets.  Being up in the mountains where the signs of early Spring with cherry blossoms, wisteria and azaleas are just now blooming I can really appreciate their warm seats and hot springs.

So far Japan has been good, I have even had the pleasure of finally seeing their well known colored cast manhole covers in person, though I can feel myself being worn out from restless nights of sleep since my hands started hurting. And since leaving Cheng Long, I keep waking up in the middle of the night wondering where I am thinking I am back in the wetlands and confused over where everyone is.