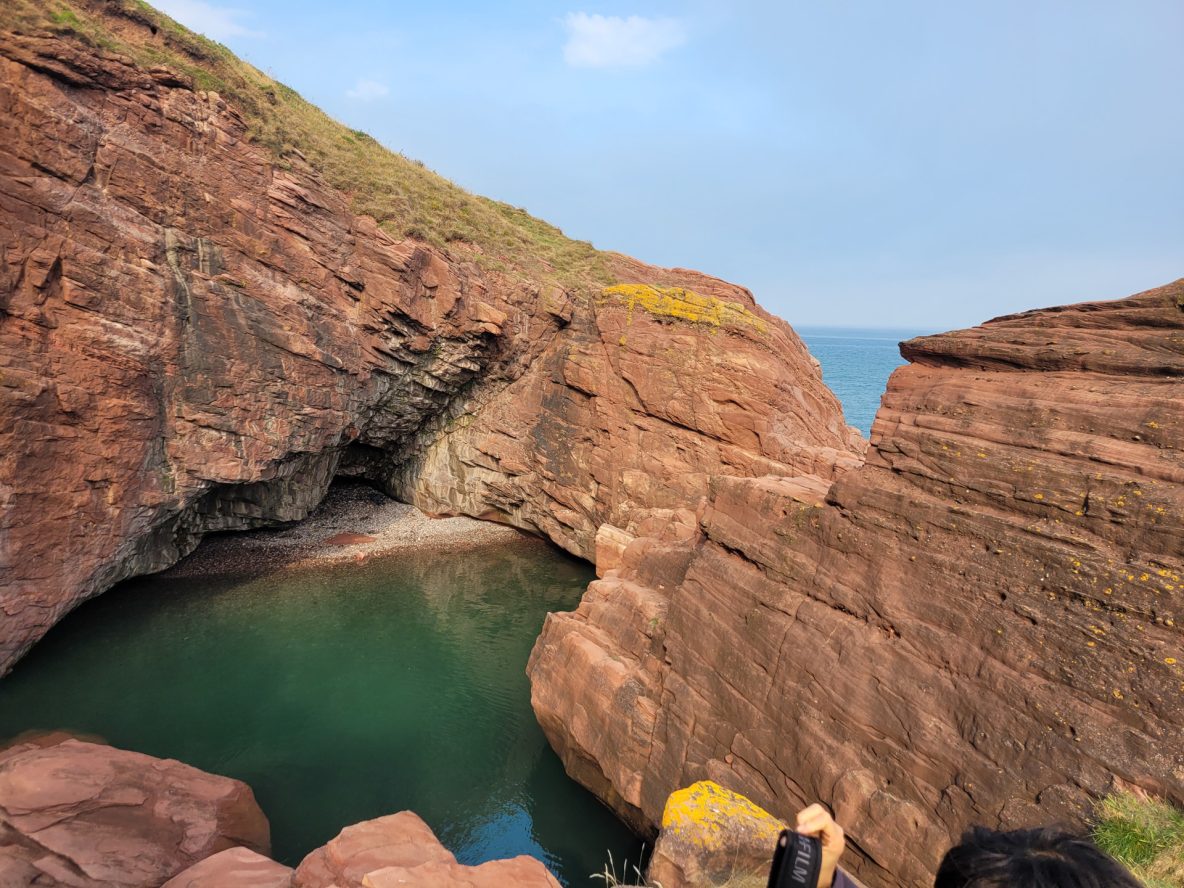 The Haar has descended upon us.

After a glorious week of sunshine and a cloudless night for the Super Moon glowing red as it rose over the water, a gentle fog has rolled in from the North Sea called the Haar. It is not a dense fog like I remember from the Headlands near SanFrancisco, but a gossamer fabric pulled across the sky blurring the horizon. Filtering the sun trying to break through. Colors are not quite dulled, but enhanced by the hazy light, being perfect for uniform photography, which I heard one of the other residents wanting to take advantage of. I thought I would stay inside with this weather, but the sun finally did break through, so once again I took my computer out to the garden, expecting a quiet morning to write. But alas, just like yesterday this was broken by friends of the Director popping in to visit garden and ask me some questions about my residency. Then the teachers running a Saturday program for teenagers came in to do a drawing workshop with the kids, so I gave up and came back in to the Dining room.

Last night Lili and I went for a walk out to the Arbroath cliffs. We took our dinner of split peas, sweet potato and flourless chocolate cake to go. We sat by the sea eating at low tide while watching the seagulls dig about looking for little morsels nestled amongst the seaweed and rocks dropped by the retreating waters. As we trekked along the cliff wall we could see a group of outcroppings bobbing about far in the water. As I tried to zoom in with my phone camera I at first thought they were perhaps sea lions resting on the exposed rocks at low tide. After we got closer, and saw some folks walking by dressed in wet suits I realized they were kayakers. Then as we walked further on a massive screeching of birds began to get louder and louder. I saw a sign saying DANGER do not walk off the paved trail due to shifting cliffs, but I had to go and find out what was causing such a ruckus. Lili warned me not to go, but once she saw the birds, which she wished to record, she ran over anyway thinking they may be Puffins. Alas just seagulls, perched amongst cliff outcroppings in droves, the rocks stained white by their droppings, making them blend in and hard to see in detail. Here is a link to the video I took on IG https://www.instagram.com/p/ChLTctHlwR9/?hl=en.

Just to get to the sea takes 20 minutes to walk, even though it seems so close. There is the town, a caravan park, busy highway, a shopping center, and a series of entry ways built in below the train tracks to enter and pass through, before hitting the sand. We have the opportunity to rent bicycles to make the journey faster, but they are super heavy and are just as much a workout. There is a bus, but they seem few and far between. So we walk. Which I do not mind, except that I seem to have developed Plantar fasciitis.

Since moving further north in The Bronx, staying put during the pandemic and buying a car, I have not been walking as much as I used to. I thought I brought shoes with enough support, but my poor feet are not happy at the moment. So today I am resting them a bit. Plan to hide away in the Heritage Dining room and write. A few of the others got a ride to an Ancient Neolithic site called White Caterthun. There are a few applications I would like to get out today.

I managed to finish one for the Queens Museum that was due on the 14th. Afterwards I celebrated by joining Lili and Emma, an artist from Sweden, with another trip to the Cliffs, they wanted to photograph. Sunday began gray and hazy, but just as we got to the Cliffs on our bikes, the sun started to appear with the late afternoon light. Lili commented that the light was so perfect that even a bad shot looked great. And it was true. It was impossible to take a bad photo of anything, the red sandstone of the cliffs, the seagulls catching the glint of the light in their wings, the water shifting from dark turquoise to teal to a lighter turquoise/sea green where the rocks below the high tide appear. 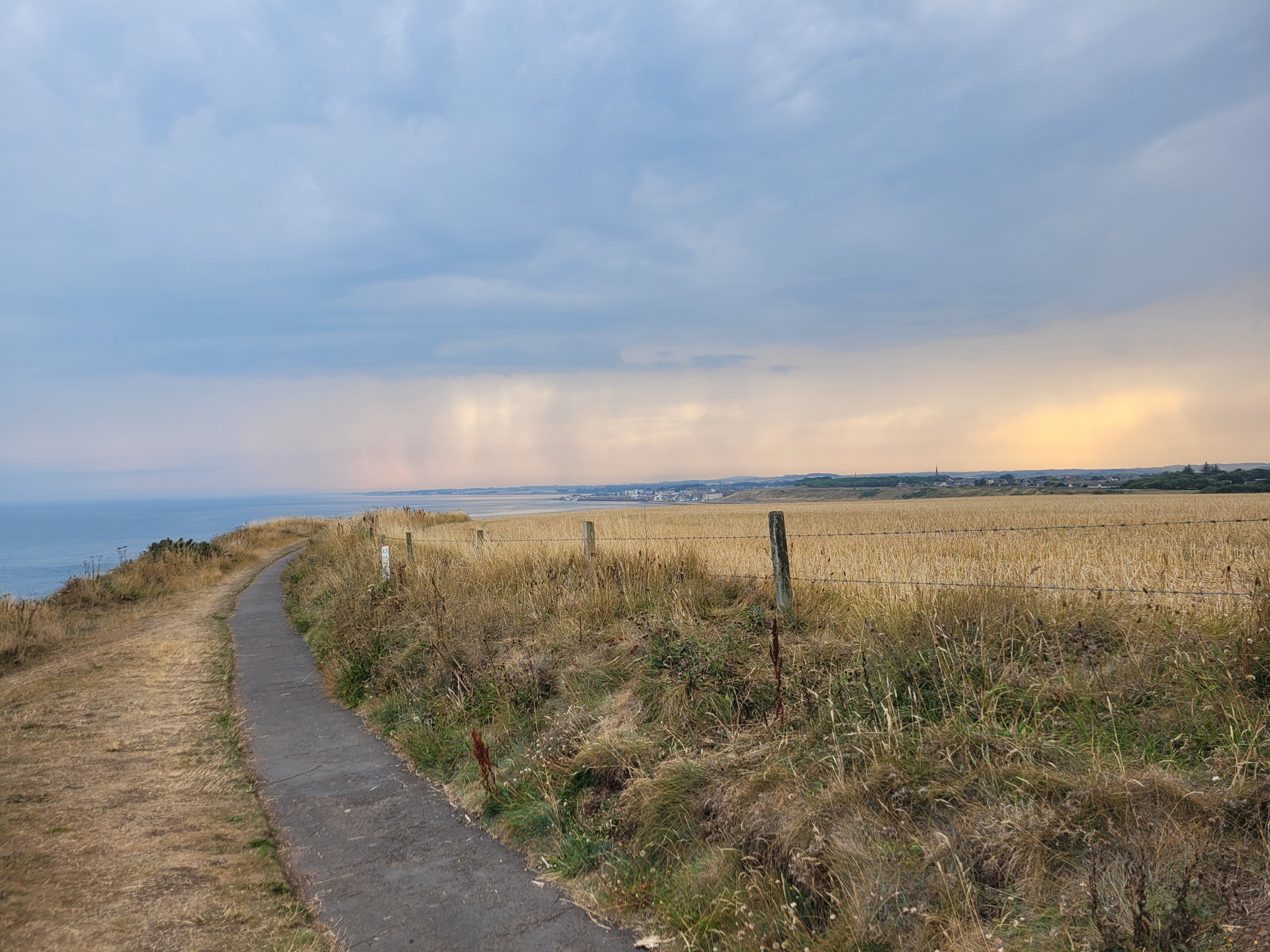 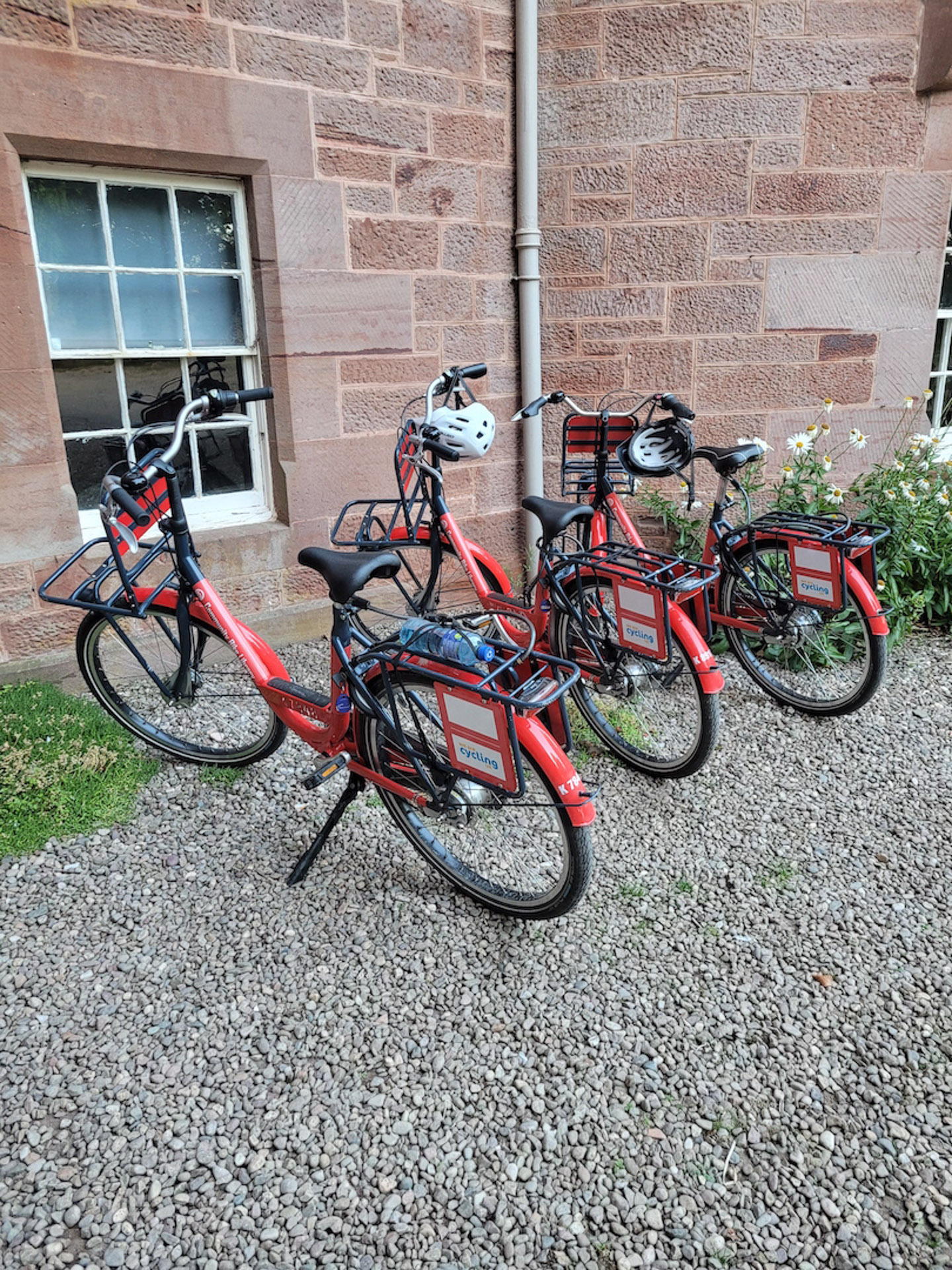